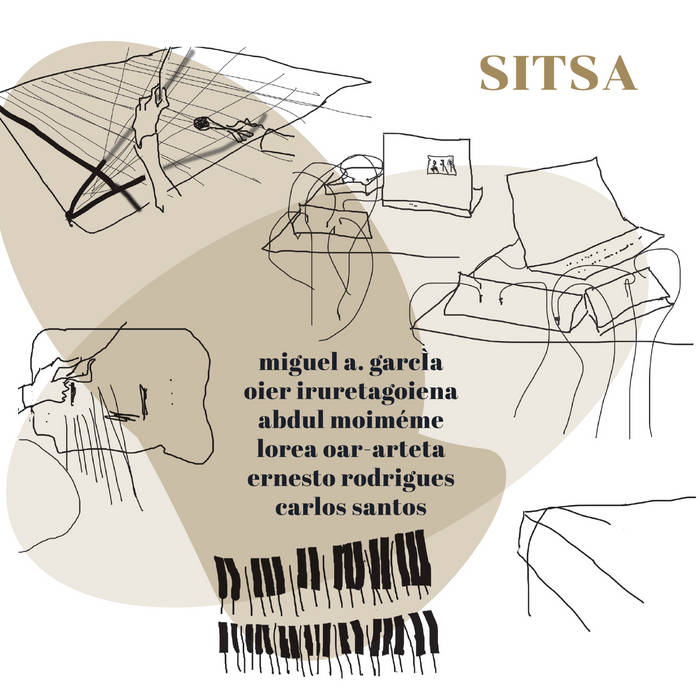 Continuing the recent theme here of improvising ensembles featuring electronics alongside traditional instruments, Sitsa actually seems to be something of a followup to last year's Coluro — with Ernesto Rodrigues joining a regional Iberian collective to form a sextet with two members on electronics, and a general tendency toward transformative timbral exploration. Sitsa was recorded in March 2018 in Bilbao (only two months after Coluro was recorded on two dates in Madrid), and features Miguel A. García (b.1980) paired with Creative Sources regular Carlos Santos on electronics: García has already appeared on Creative Sources, as well as elsewhere, including in a solo setting, but also e.g. on Golden towers and electric frictions (recorded in March 2016), featuring the two Rodrigueses in a quintet with Abdul Moimême, who also appears on Sitsa (on which he's credited with both guitar & metals): The former can seem almost like a study for the latter, involving a sparser setting with more of a central focus of activity, rather than a general tapestry spanning auditory space more polyphonically.... (This notion of "focus" will recur.) In contrast, Coluro might be heard as investigating somewhat different concerns, with a sort of lightness emerging from balancing both timbral colors & pitch ranges across the ensemble spectrum, an investigation of a sort of coordinate spanning space as previously noted.... The sextet on Sitsa is filled out by (previously unknown to me) Oier Iruretagoiena (electric organ) & Lorea Oar-Arteta (paper & contact mics), however, giving it more continuity & center, but with pitches (often simultaneously) across the gamut: After an initial signal clank or clunk, it thus moves into a deep roar, hiding, scuttling, broadly shifting & escaping resonances (both high & low) sometimes turning to searing intensity around a generalized atmosphere of vibration. (Sitsa definitely benefits from better speakers in a real stereo setup.) Its layers of activity might also be compared to Stratus (recorded a few months later), which is a "more acoustic" ensemble (meaning that the electronics, also from Santos, tend to remain more in the background focusing on audibility), and projects a sort of sparse open air delicacy (of color, etc.), in contrast to the "indoor" industriousness of Sitsa. Returning to the beginning of the recent trilogy (of discussions here) with Monopiece + Jaap Blonk, then, one might indeed observe a more "static" (or ready-made) pop vibe there in the way that timbres jump out from a largely nonexistent background, whereas Sitsa transforms sounds into other sounds as grounded in a deep rumble: It's thus rather more assertive than many albums from Rodrigues (& indeed García, etc.), emphasizing continuity within its own (more mysterious, even elemental) DIY vibe: It might thus be compared to Skiagraphía (discussed here April 2017), with its own dual electronics setup producing a sort of broad wave or crescendo across various twittering timbral details, or even to the more recent guitar trio album Magma (also with Moimême, in a followup to Basalto, in what had been a starker recording of the same trio released in 2016...), the latter involving a sort of rock-based assertiveness transformed into another forceful timbral wave.... As noted, though, Sitsa is generally more polyphonic, including articulating counterpoint across a variety of extremes — & involving more presence than many Rodrigues albums — via various clanks & rumbles, boings, creaks, quasi-sirens, etc. This variety is then rendered basically continuous — except for prominent track breaks — via the interiorized quasi-industrial relation of a dull roar. (One might thus suggest that Sitsa interrogates continuity: Such exploration extends into concepts such as individual notes, which tend to appear only as moments of transformation. One is instead presented with a more generalized sense of evolving sensation.) Transgressing discrete impositions of individual notes marks Sitsa as having a very contemporary orientation, and indeed not only does one find a post-serial or post-concrète exploration, but the original core of "lowercase" (now rendered in this space as a kind of generalized mixing emphasizing sonic details) appearing explicitly in the paper & microphone combo. And in keeping with an exploration of continuity, one would be hard-pressed to pick out the specific sound of that paper.... In all of this, technical descriptions of Sitsa tend to miss its transformative & especially affective quality, though: It achieves a powerful, if paradoxical, effect of concentration & calming — with the industrial affect of contradictory physical space somehow rendering disorientation into flowing presence. (The album title, if one believes online translation, is apparently in the African Bantu Chichewa language, meaning to reduce or unload, and unloading tension does seem to be the affective focus of the album. Track titles are then in other languages, some — including Chichewa? — seemingly unconnected to the musicians....) There is consequently both a sense of austerity & a lot happening at any particular moment. (One might then compare to the sophisticated, symphonic summation of Music for Baritone Saxophone, Bass Clarinets & Electronics, particularly for its rather different approach to "making audible" via electronics, a tapestry contrasting & highlighting detailed timbres, projecting its own sort of "organ" feel....) And so I've found Sitsa to be consistently potent & transformative, particularly in its ongoing & extensive combinations of highs & lows. Todd McComb's Jazz Thoughts