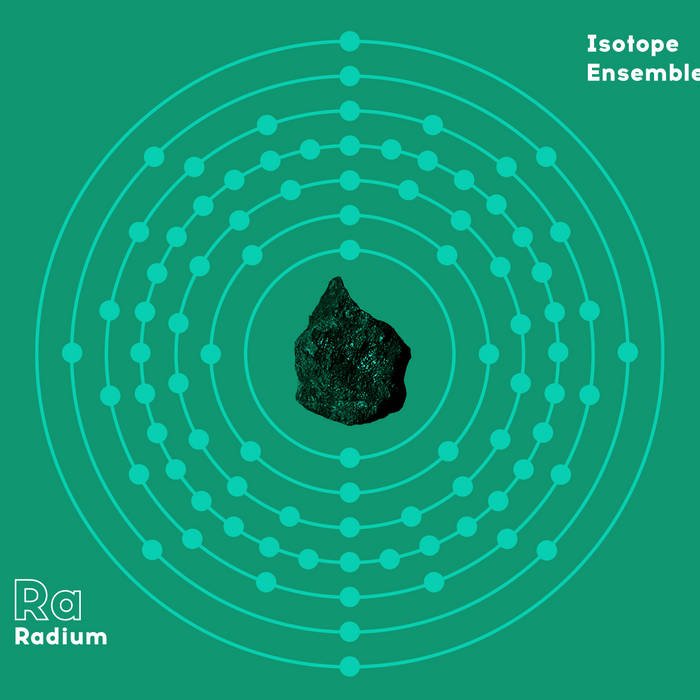 [...] Finally then, let me also note the upcoming new Isotope Ensemble (now with 21 members) album ("only" their fourth), Radium, also from CreativeFest#12 last November: It's a rather ominous, shearing production, slowly building over a single track (as on the two albums featured in this entry) to a raucous end.... Todd McComb (Medieval .org)

There are albums, like the Art Ensemble of Chicago's People in Sorrow, that rise from nearly nothing eventually to overwhelm with pathos. That masterpiece was certainly of its time, and it might be reasonable to view a statement like Radium as a reactive misreading of that late 1960s classic. The two long pieces begin similarly. Ernesto Rodriguez and company open this live recording with clicks, rasps, the occasionally defined pitch and low-register rumbles, clearly defined, that become absolutely mammoth about half-way through the 26-minute work. Radium is one of those really fascinating listening exercises in which it's nearly impossible to tell what is what and who is who, despite the fact that the recording is a wonder of detailed precision. Check out the pulse around the two-minute mark; who's responsible for it? Dig the whistling bits nearly seven minutes in, but from whence do they glide into focus? All of this ambiguity places those few tones that achieve any sustained prominence in a different light, like the vibrato-laden mid-range shimmer at around 10:30. It coopts attention, gradually at first, but fades just as quickly into a background hum of points, electronic whirrs and hums that might be a drone if they could be classified by pitch in any way near convincing.
Enough about structure however, as the form is even more interesting. The music does indeed build, then fade, then build again, fade again and build only to fade, in conclusion, into the myriad clicks that gave it life. This is no paean to the suffering of humanity, or at least not superficially. It ends up inhabiting a space closer to Mahler's final completed symphony as it rises, crests, fades toward silence only to rise again, but even that sense of motion is ultimately illusory. The whole experience can feel like a meditation on waves or a voyage through increasing levels of frustration and ultimate disillusion, but it is wonderfully done and expertly captured, especially those Gargantuan subfrequencies. They need to be experienced to be believed, anchoring nothing but providing a decidedly tactile element to a stimulating musical experience! Marc Medwin (The Squid’s Ear)

Ernesto Rodrigues is apparently tireless, whether recording projects for his Creative Sources label, organizing a multitude of permutating large ensembles or presenting a broad spectrum of the Lisbon improvising community in groups of assorted sizes. His Creativefest takes place in November, and the most recent edition, XIII, ran for six days at the festival’s home base, O’Culto de Ajuda. The CDs here present two of Rodrigues’ on-going large ensembles, one recorded at XIII, the other from XII.
If an ultimate test for any large improvising ensemble is to maintain movement and density at very low volumes, then Rodrigues’ Isotope Ensemble ranks very high. Radium is a single 27-minute piece from 2018 that spends much of its time at the level of a whisper, a hive of tiny sonic gestures in which even foregrounded events scrape silence. It’s a 22-member ensemble made up of diverse instruments, with only Rodrigues (this time on baroque violin), do Mar, Carvalho and Moimême appearing from the later String Theory line-up. The other bowed strings are down to two cellos and a bass, with three guitars present, including Luis Lopes on electric, and such traditional instruments as Brazilian zither and psaltery. That broader palette then includes three woodwinds, three brass, a fan organ (a small electric reed organ that seems to sound like an accordion at some points), and two people on electronics, Carla Santana and Carlos Santos, the last an essential figure in Lisbon music and the Creative Sources world, here responsible for mixing, mastering and graphic design as well.
Though the volume picks up briefly around the 23 minute mark, during which a tuba (I think, the other possibility, a euphonium is operating quietly in the background) sounds briefly obstreperous (it’s only “loud” in context), it ultimately reinforces the strange quietude here, as if the activities of a busy shopping mall were carried on under a vow of monastic silence: a wisp of string, a burble of keyboard, an unidentifiable tapping, a collective rustle. It’s beautiful and original, at once compelling and therapeutic. Stuart Broomer (The Free Jazz Collective)